by Donald A. Wise 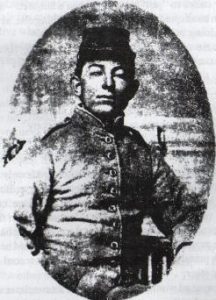 When the War Between the States (Civil War) began, James R.J. Jones enlisted on 17 March 1861 as a Private in Captain Harvey G. McKinney’s Company, Major’s Regiment of Mounted Men, Missouri State Guard, C.S.A. Military records at the Missouri State Archives show that Private James R.J. Jones being paid for six months from 17 March 1861 to 17 November 1861 at $11.00 a month plus 40 cents per day for use of his own horse during this time of service.

On 20 December 1861, James R.J. Jones and his brother, George N.F. Jones, were captured in Boone County, Missouri, along with eight other Confederate soldiers by the Union Army.  They were taken to Palmyra, Missouri, and tried by Military Commission.  Charges cited were:

Regarding the first charge, a party of men on 20 December 1861 had burned and destroyed two railroad bridges at Sturgeon and Long Branch, and portions of the railroad track and sundry cars upon the North Missouri Railroad. The Military Commission found three of the captured soldiers guilty and they were sentenced to be shot to death. James and his brother, George, along with three other Confederate soldiers were also found guilty of these charges, but were to be retained in custody. These soldiers were later transported to City Point, Virginia, where they were exchanged for Union prisoners of war. While at Petersburg, Virginia, James R.J. Jones had a tintype made while in his Confederate Army uniform. On 25 March 1863, Private James R.J. Jones was paid $224.00 for his back pay for military service in the Confederate Army according to his military records.

Mahala (Barnes) Jones died on 26 October 1899 and was buried in the Dripping Springs Cemetery near their farm. The 1900 Federal Census of Missouri indicates that James R.J. Jones had purchased a home in Columbia, Missouri. Two of his sons: William and John David were also living in this household along with John David’s wife, Ona C. Tucker.

In 1905 James R.J. Jones decided to relocate at El Dorado Springs, Missouri. He hoped that the benefits of the spa would help his health. His obituary mentions that he suffered a chronic malady for several years. His death certificate states that he died from tuberculosis.

While living at El Dorado Springs, James R.J. Jones met and married a widow, Frances (Cooper) Graves. on 31 December 1905. James R.J. Jones was listed in the 1910 Federal Census of Missouri as living in Box Township, Cedar County, Missouri. His occupation is given as Farm Laborer who owns his own truck garden. It also indicates that James R. Jones was a survivor of the Confederate Army. James R.J. Jones died on 15 February 1915 at the age of 74 years and is buried in
the El Dorado Springs City Cemetery. His wife, Frances (Cooper) Graves Jones died on 28 March 1919 and is buried beside her husband, James.

The author who is a great grandson of this Confederate Veteran arranged through the United States Department of Veterans Affairs for a military marker to be placed on James Riley J. Jones grave. This was accomplished in March, 1995, and the bronze marker reads: “James Riley J. Jones, PVT. Co. H, 5 Regt. MO INF, Confederate States Army, Jun 11, 1841 – Feb. 15, 1915.” The Southern Cross of Honor is also included on the military marker.