This church was organized about the year 1830. The following were some of the first members: John Randall, Stephen B. Carnegy, John Lydick, A. D. Huntsberry, Samuel Y. Lee, John Walker, Cornelias Malone, and – Deane. The first church building was of brick and was built in 1830 or 1831. The present building is also a brick structure, erected in the year 1839, at a cost of about $4,000. It was dedicated the same year. Some of the pastors of this church have been : Rev. Brown, Rev. Richard Sharp, Rev. Light, Rev. Horace Brown, Rev. Bewley, Rev. McMurray, Rev. Tutt, and Rev. E. M. Marvin. The lot where the church building stands was presented to the church as a Christmas present December 25, 1837, by John Randolph, John E. Copelin, John Lydick, Tlios. B. Parker, Thos. J. Wise, S. W. B. Carnegy, Henry Millan, George Bacon and Benj. Davies. The present membership of this church is 156. 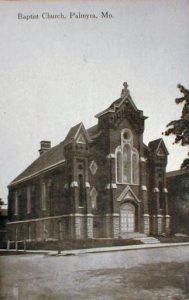 The First Baptist church of Palmyra was organized the second Saturday in February, 1833, and the following were the original members Spencer Clark, Stacy Longmire, John Longmire, Anthony Pool, Michael R. Bower, Polly Brown, Susan Morton, Sally Lewis, Martha Samnel, Eveline Overton, Polly Eastill, Martha Moon, Sally Richards, Lucy Thomas, Amy Pool, and Maria Bower. The first church building was a brick structure and was built in the year 1836. Then in 1871, another building was erected at a cost of about $15,000. The latter building is a handsome brick edifice and prominently situated on Main street. It was dedicated in March, 1871. The dedicatory sermon, being preached by Rev. J. M. C. Breaker, of St. Joe. Mo.  The pastors that have served this church have been Spencer Clark, —–Vardernan, Taylor Hendren, —– Fuqua, Norman Parks, Andrew Broaddus, Jerry Bradley, Wm. Hurley,  James S. Greet, N. N. Wood, R. M. Rhoads, J. H. Luther, B. F. Hixson, Dr. S. A. Taft, Dr. S. H. Ford, A. Rhoads, P. R. Ridgley, and M. L. Thomas. There have been for the year 1883, 38 admissions and about the same number of-baptisms in the church. This church has been in a flourishing condition for 50 years, and the present membership is 189. 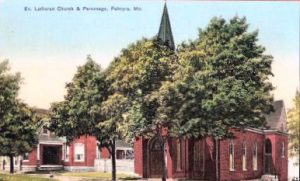 Zion’s church.-German Evangelical Lutheran-was organized about the year 1835 or 1836. Some of the original members were:Rev. J. P. Best, George Stark, Henry Bantu, J. G. Henritei, and Wm. Drescher. The church building is a brick structure, erected in the year 1847,and dedicated the same year by Rev. Prof. C. F. W. Walther D. D. The Rev. J. P. Best was the pastor of the church until 1866; then Rev. F. Fredderking took charge till the year 1869; Rev. B. Miessler was then pastor until 1877, Rev. A. Willner until 1880, and since then Rev. E. Schuelke has been the pastor. Since the year 1860 until the time of this writing there have been 360 children baptized and 225 confirmed; 3,800 persons have attended communion and 50 couples have been married, and the number of burials has been 120. At time of writing the membership is 27, with about 60 families.

The first congregation of the Episcopal Church in Palmyra was organized by Rev. Chaplin Hedges, in January, 1837. The first church building was begun in the summer of 1838, and completed in January, 1839. It was the second Episcopal church building in Missouri. It stood a few rods north of the present edifice. The consecration services were conducted by Bishop Jackson Kemper, in November, 1840, at which time there were 15 communicants inthe village and about 10 more in the country. In 1846 the lease of ground on which this church stood expired, and the congregation not being able to redeern it the building was lost. For a year afterward services were held in the Odd Fellows Hall, and in the third story of a large brick buildigg on Main street. In 1856 the chapel of St. Paul’s College was completed (consecrated in 1857 by Bishop Hawks) and it was used as a parish church for several years. It was of white limestone, and cost $6,000. Though never entirely completed, it was a very churchly edifice. Recently it has been torn down. The last service held in it was June 8, 1880 which day the corner stone of the new edifice was laid. The present church building, on the corner of’ Olive and Lane streets, was built in 1880 and 1881, and opened for divine service, May 2,1881. It was consecrated January 17, 1882, by Rt. Rev. Bishop Robertson. The entire cost of the building was about $3,800; the entire cost of the property as it stands, $4,400. The pastors of the Episcopal Church and rectors of the parish in Palmyra have been Revs. Chaplin Hedges, Thos. E. Payne, George Sill, W. B. Corbyn, Francis J. Clerc, S. Y. McMasters, W. B. Corbya (again), J. A. Wainwright, F. B. Scheetz, and J. A. Wainwright (again) the present pastor.  The average number of communicants of this particular church has never been more than 40 or 50. For the past ten years the confirmations have averaged annually three in number.

The Christian church in Palmyra was organized in 1840 by Elder Jacob Creath. The original members were Lewis Bryan and wife, Robert Stewart and wife, Josiah Elliott, Alex. Baxter and wife, Joseph Errett and wife, Mrs. Collins,—- Johnson, James Peak and wife, Enoch Hooten and wife, John Sallee and wife, William Sallee, Thomas Stewart and wife, Mrs. Curd, Zerilda Nicholson, H. Perrin, Mrs. E. Wimer, J. L. Lampkin and wife, Eli Schofield and wife, and Mrs. L. M. Havden. The church building was erected in 1846 at a cost of $2,000, and is of brick. The pastors that have served the church have been Jacob Creath, Jun., —-Adkinson, Dr. W. B. Hopson, John Lindsey. Dr. Gordan, B. H. Smith, Peter Donan, R. L. Cave, and the present pastor, E. C. Browning. Of the original members still living the there are Elder Jacob Creath, who organized and was for many years minister to the church, and is now living in Palmyra; Mrs. Sarah Baxter, Thomas Stewart and wife, all now of Palmyra ; Mrs. Errett, wife of Elder Joseph Errett, deceased, now of Pike county, Missouri Enoch Hooten and wife, now of Mexico, Missouri, and William Sallee, now living near Emerson, this county. The present membership of this church is 145.