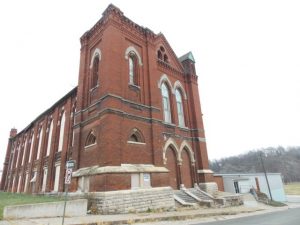 On the 29th day of November, 1859, when but one Congregational Church (that of Rev. Dr. Post, of St. Louis) existed in Missouri, a small band of New England and New York Congregationalists with a few others who held similar faith, met at a private residence in this city and having adopted the Articles of Faith of that denomination, they joined in a society known as the First Congregational Church of Hannibal. their first house of worship was built in South Hannibal, where it still stands, an unpretending frame structure, capable of seating from three to five hundred persons. but so rapid was the growth of this the second Congregational church in Missouri, that in the year 1870 it was determined to erect a more commodious building, centrally located. A site was selected at the corner of Lyon and Church streets, where the present building, metropolitan in cost and style, was erected and furnished at a cost of about $7000. Without doubt it is the most elegant church edifice in the State outside St. Louis, and but few in that city surpass it in size or interior beauty. The seating capacity of its main audience room, exclusive of gallery, is about 80, while with chairs in the aisles and open spaces, including the galleries, accommodations may be made for an audience of 1,500. The main room, exclusive of galleries is 110 feet in length by 62 in width. The choir gallery is in the rear of the pulpit, will seat fifty persons, and contains the largest pipe organ in the city, costing $8,600. Mrs. C. P. Heywood presides at the organ and has won the reputation of a most brilliant performer. The choir of this church numbers twenty members, and has been maintained with undeviating constancy from the very beginning of the society. The average attendance at Sabbath morning service is estimated at 250. The church membership as 269. The Sabbath school, now under the efficient superintendence of Mr. C. O. Godfrey, contains 800 scholars instructed by thirty most devoted and excellent teachers. This Sabbath school has its date coeval with origin of the church, and has been a remarkable institution; from its commencement to the present time it has maintained one feature which has made it widely noted – its “Monthly Concerts” – which have month after months, and year after year, attracted crowded houses of children and adults to be both instructed and delighted. It would be simply impossible to estimate the extent of the moral and religious influence exercised over the youth of this community by this school alone. The Sabbath school occupies the first or semi-basement room, which will conveniently accommodate five hundred pupils. The church parlor, infant class room and pastor’s study are upon the same floor with the main Sabbath school room, and the whole are models of convenience. Rev. Geo. W. Grover, late of Concord, N. H. has been recently to this charge not simply brilliant talents, but also the most scholarly attainments, and an enthusiastic devotion to the cause of Christ, and bids fair to attain great popularity not only with his own people but also with the general public.