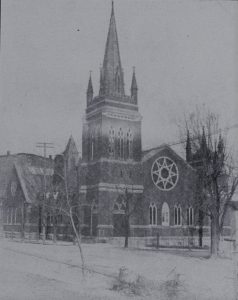 This now large and influential organization had a humble origin as far back as the year 1832, when it was organized on the 9th day of August, at the residence of Mr. Lyman Nash. For many years its congregation worshipped in the building which is the present Hannibal Court House on 3rd street. In 1859 its present handsome and capacious house of worship was erected at the corner of 6th and Center streets, where its tall and elegant spire forms a conspicuous object, seen from all parts of the city. Within the last three years its interior has been very handsomely decorated, *** galleries built to accommodate the increasing pressure of its congregation, a beautiful pipe organ of great sweetness and expression, costing twenty-five hundred dollars has been added, and the finishing throughout is extremely tasteful and attractive. Its present pastor, Rev. Geo. H? Spining, has occupied his pulpit with great acceptance for several years; under whose influence the two branches of the Presbyterian Church in the city have been united, the membership largely increased and the usefulness of the church widely extended. The Sabbath School connected with the church numbers three hundred and fifty scholars and forty teachers under the superintendence of Messrs. Fred L. Dubach and Wm. C. Foreman, the latter of whom is also leader of the choir, a double quartette of fine singers. Mr. J. Ellis Fisher, is the accomplished organist. The membership of the church numbers 883 and the average attendance at its various Sabbath church services is estimated at 460. The entire cost of church, building, grounds, organ and furnishings is put at $16, 000. The seating capacity is the audience is 700. This organization also maintains a mission Sabbath School in the northern limits of the city, under the efficient superintendence of Mr. A. Shenker, numbering nearly one hundred pupils, gathered from among the destitute classes of that section of the city. This is but one way in which this church is accomplishing a great and good work.