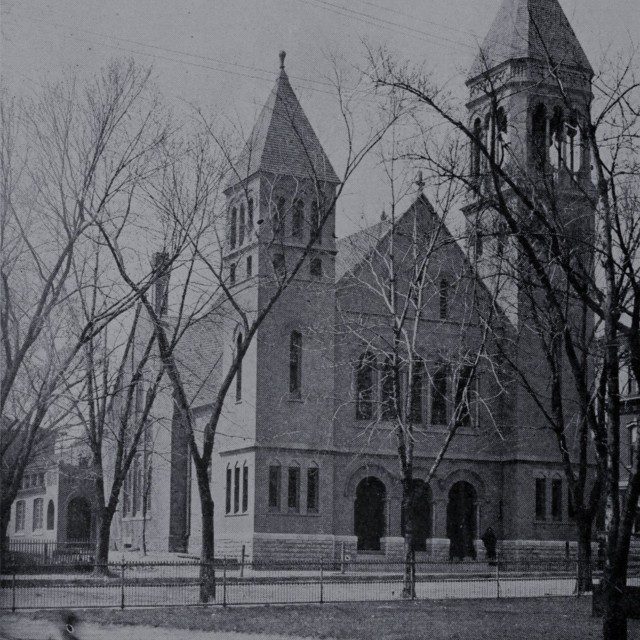 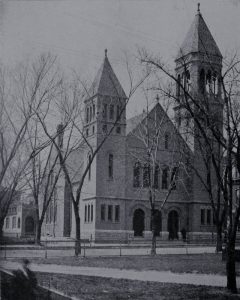 In 1834 the General Association of Missouri Baptists was organized and in August of the same year the Bethel Association. At the August meeting a resolution “that this Association discountenance and declare non-fellowship with the one~ in favor of the missionary system” was lost by a large majority, but the following year the mission controversy resulted in the division of Baptists, and the Missionary Baptist Church was born.

November 25, 1837 our church under the name Zoar Baptist Church was organized at the home of Stewart Self, two miles west of Hannibal, and according to records Robert Hendren was elected pastor of the church consisting of eight members: Robert and Mary A. Hendrcn, Stewart and Nancy Self, ,James Brown, William Halsey, and two colored women, Maria and Providence. The Church constitution provided that all should be left free to act according to their pleasure on the subject of missions.

The Zoar Baptist Church joined the Bethel Baptist Association in 1839 and in ,July 1841 it moved to Hannibal and took the name of Hannibal United Baptist Church. It obtained permission to occupy the public school house two Sundays in each month. In the spring of 1845 having purchased a lot on the north corner of Church and Fourth Streets a house worship which comfortably seated 300 persons was erected and was know as the First Baptist Church of Hannibal.

In 1845 the Baptists numbered 155 white and 60 colored members, had a good Sunday School, regular meetings for the transaction of business, for prayer service and for worship and conferences. To quote from early records “Rev. W. C. Busby a young minister of 22 was called to the pastorate which high and honorable position he filled with credit to himself and satisfaction to the congregation”. Soon the civil war came on and stormy times came for all churches. There was not material or wisdom, diplomacy or patriotism enough to avert a most terrible war between fellow citizens, and again our Baptist ranks were divided, resulting in the organization of the Harmony Church with 48 members. Later both Harmony and the First Church dissolved. In March 1869. the war over, Baptists came together again and by the next year the group had grown sufficiently to merit the construction of a new, commodious house of worship. The lot where this church now stands was bought and a $14,500 building was erected and dedicated to the service of God as the Fifth Street Baptist Church. In 1887, Rev. T. D. Dennian a young eloquent divine from Rochester, N. Y. accepted his first pastorate by taking charge of the Fifth Street Baptist Church. Until 1893 that building served the congregation, but by that time it was apparent that a temple more befitting the fidelity and growing strength of its membership was desirable, and with prayer for guidance of the Giver of all good and perfect gifts they proceeded to turn talk into work, desire into possession. On July 10, 1893 with due religious ceremony, the corner-stone was laid. From that clay to the present one the labors of love and unity have progressed without ceasing.

Through the efforts of some faithful members of the church, a Sunday School was conducted each Sabbath afternoon in the West Side. This resulted in the organization of Calvary Baptist Church, October 4, 1887. God has richly blessed them through the passing years and at present they have a membership of 702, (September 1, 1937). Likewise some years after our Church went forward in aiding the Oakwood Baptists in organizing the Prince Avenue Baptist Church (1911). On September 1, 1937 their membership was 179.

It would be only a guess to say when the Sunday School was organized in Fifth Street Church. The earliest records we have are for the year 1898. The highest attendance was during the year 1925 when the total attendance reached 28,800 or an average of 554 per Sunday. The Ladies’ Aid was organized in 1883 by a group of devout women who desired to help in a financial as well as a spiritual way. The Woman’s Missionary Union was first organized during the Pastorate of Everette Gill (1896-1903). The W. M. U. now has three circles: Everette Gill, Lillian Graham, and Lydia. It also sponsors the auxiliaries.

We celebrate the end of the first Hundred Years of this Church’s existence, with 984 members (September 1, 1937). We find evidence on every hand of our forward work. Constantly desiring with hope and courage to extend our field of labor and service for our Master, our hope is that our Heavenly Father will give us the strength and guidance to cope with the problems of the coming days. May we constantly pray that the morale of our people be lifted, and strive for the more worthwhile things in life.