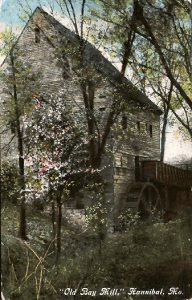 A recent issue of the National Miller contained a write-tip of some of the old water mills of Missouri, and among them was the old Bay Mill South of this city. The article, in part, is as follows:

Perhaps one of the most noted of the early day grinding outfits was the Bay Mills, north of Hannibal, Mo. It had a tremendous overshot wheel, and the machinery was wonderfully powerful for its day. It did grinding for Missouri, Iowa, and Illinois farmers, and the quality of its product had almost a national reputation. Later Capt. A. S. RoBards, a “forty-niner,” established a large flour mill at Hannibal, and its flour took premiums at the World’s Fair, New York, in 1853. A barrel of RoBard’s Premium flour was sent in gilded hoops to the Queen of England.

There were interesting features connected with the “water mill period” of the West, when most large streams had waterwheels to do various kinds of work. The late W. E. Mc Cully, at one time chairman of the Railroad and Warehouse Commission of Missouri, remembered the popular water mill operated by his father on the Chariton river, and what a social event “going to mill” was for the early settlers. Mr. Mc Cully, speaking from his remembrance as a boy, described it this way:

“It was the event of the year when a farmer went to mill those days.  Some of father’s patrons drove down from Iowa, 100 miles or more. At times the offerings were so heavy that a farmer would have to wait two or three weeks for his turn. As soon as a new load arrived its turn would be indicated by a red keel mark put on the sacks by the miller or his helpers. Any dispute about whose turn came next was settled by the miller. His word was the law of the river.

“It was also a part of his duty to referee bouts at fisticuffs and wrestling. The customers as a rule did not get impatient. They came prepared to make a long stay. They would bring with them plenty of provisions and fishing lines. I’ve seen ’em strung out for three miles up and do the river fishing, and they caught some big ones too, for the river was full of fish then. As the old buhrs would only grind two or three shelled corn an hour, it was necessary to keep the mill going all night to come anywhere near handling the trade. There was a night miller, who worked by the light of tallow candles.

“At midnight Saturday the water gate was shut until early Monday morning. The closing of the gate formed a trap for the fish, and during hours when work was suspended the catch this way was sometimes large.