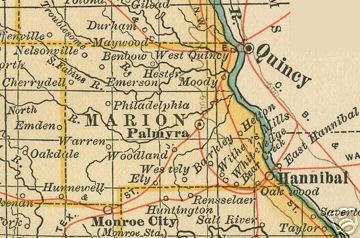 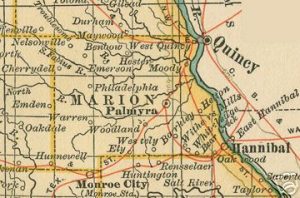 West Quincy is shown on this map of Marion County across the Mississippi River from Quincy.

In the year 1828, a ferry was established across the Mississippi at Quincy, and in February, 1829, Willard Keyes obtained license from the Marion county court to land this ferry on the Missouri side and to operate it regularly. Mr. Keyes lived in Quincy, and was one of the first county commissioners of Adams county, Illinois. This was the first ferry across the Mississippi north of Louisiana.  The landing on this side was the origin of the village of West Quincy. Keyes sold the ferry to Eli Merrill, who operated it for some years. In 1840 the proprietor was Gov. Carlin, of Illinois, who in that year built the ferry house. His was the first steam ferry, and the boat was called the “Mary Ann.” Previously the boats had been run by hand and horse power. After a time Capt. John Taylor purchased the “Kossuth,” and other boats since then have been the “Mary Cole,” the “Emma,” the “Quincy,” the “Rosa Taylor,” and the present boat, the “Frank Sherman.” The last named was built in 1878. Capt. Taylor is still the owner.

The first house in the village of West Quincy was built by a Mr. Patterson, in 1849. It stood on the site of the present ferry dock, and was washed away in the flood of 1851. The first store house was built by Capt. Taylor, and Isaac Stephens sold goods in it many years ago. In the winter of 1859-60, Henry Forquert built a store house. The town is laid out on the center of section 3, township 59, range 5, and contains seven streets running east and west, named (beginning the north side) Taylor, McGinley, Main, Clark, Vine, Cedar and Walnut. Only one of these streets, however (Main), is discernible to the visitor. Six streets bearing numerical designations run north and south, named from First street to Sixth. About the only buildings however, are along the river and on Main street,besides the railroad depot. Three railroad tracks lead into West Quincy,–the St. Louis, Keokuk & Northwestern, the Wabash, St. Louis and Pacific, and the Hannibal &- St. Joseph. The Chicago, Burlington & Quincy runs its trains over the tracks of the St. L., K. & N. W. The town was regularly laid out January 28, 1871.

Fora time during the war and before the building, of the railroad bridge the place was the terminus of a stage line from Keokuk, Iowa. Only a few houses were ever here at any time, however. The city of Quincy, just opposite, has forbidden any town of considerable size, even if the site were not below high water mark. The floods of the injure the village no little, flowing through it, and over it and around it sometimes unrestrained. Notable floods in times past which have damaged the village were those of 1844, 1851, 1857, 1862, and 1881.

In October, 1868, the railroad bridge across the Mississippi was completed and trains began to run. Work on the bridge was begun in the latter part of the year 1866. Nehemiah Bushnell, of Quincy was the first president of the bridge company. Thos. C. Clarke was chief engineer, Col. E. D. Mason was first assistant engineer and superintendent of construction, George Walcott and H. H. Killaly, assistant engineers. Warren Colburn was consulting engineer.