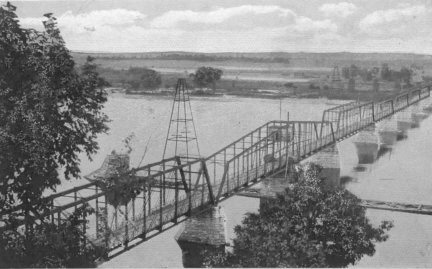 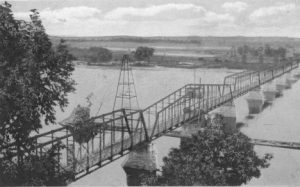 This combined railroad and highway bridge over the Mississippi river at Hannibal was completed under the administration of the “Hannibal Bridge Company,” formed by the consolidation of two companies –the “Pike County Bridge Company,” incorporated in. Illinois in ‘March, 1867, and organized June 4, 1869, with Alexander M Starne, president; and Ozias M. Hatch, secretary and treasurer; and the “Hannibal Bridge Company,” incorporated in Missouri, May 24, 1869. In December, 1869, the consolidation was effected, with Mr. John T. K. Haward, of Hannibal, as president, and Ozias M. Hatch, of Springfield, Illinois, as secretary.

On the 29th of July, 1870, a contract for both substructure and superstructure of the bridge, proper was entered into with the Detroit Bridge and Iron Works. The plans had been previously prepared by Col. E. D. Mason, the chief engineer. The Bridge Company adopted the plans of superstructure ” designed by Willard S. Pope, engineer of the Detroit Bridge and Iron works. The agreed price for the whole was $485,000. By the terms of the contract the work was to be completed ready for use within one year. The time was very short–much less than, that before given for any similar undertaking; but the contractors met the requirement.

The foundations, upon which depend the permanency of the work, in all cases – excepting that or the west abutment, which is built up from the rock–are supported by pile bases. The piles in piers 2 and 3 were driven to the rock, and at the other piers. they were driven till a sufficient resistance was obtained. Upon the piles, cut off at a level with the bottom, was placed a grillage of heavy timber, forming the foundation for a floating caisson. This caisson was sunk to its position as the masonry part of the pier was added to its weight, the sides being kept above water until the mass was fairly settled upon the pile heads.

At the west abutment the rock bed of the river was found but a short distance below the surface, and the masonry was placed directly upon it. The rock, a variety of blue soapstone, was excavated in steps, to receive the wing walls. This abutment contains 372 yards of masonry.

The following table shows the time occupied in the construction of each pier, and the depth of water at the several points at the time of the sinking of the respective piers:

The bridge is approached from the west. by a long, curve, completing a right angle with the river and passing through a tunnel 302 feet in length, out through what is called lithographic limestone. The excavation was, made at the east heading with Burleigh drills, and powder and nitroglycerine blasts. At the west end, by hard work alone, a heading of full width and some nine feet in depth was driven through; the top of the heading being on a line with the roof of the tunnel, the bottom was cut afterwards. Its dimensions, after being, lined throughout with brick, are 302 feet long, 20 feet high and 1.8 feet wide. Both entrances are ornamented with handsome cut stone faces. The tunnel was constructed and completed about the same time as the bridge.