The First Railway of the West 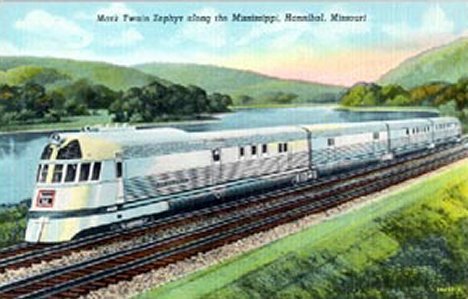 One routing his way from Palmyra through what is now Suter pasture, out across the State highway, and winding his way down the side of the bluff to the site of old Marion City, could still find faint traces of an old railroad right-of-way. Though its rails were made of wood and the cars that passed over it were drawn by horses, it was nevertheless a railway, and it served the purpose of the early day in which it was built.

Marion county today, with much pride, points to the fact that it was in the building of this little railway, known as the Palmyra-Marion City Railway, that the first railroad spike west of the Mississippi River was driven.

Back in the forties, when the Marion City boom was on people from Kentucky, Virginia and other eastern states were rushing to the fertile little valley around Marion City, Palmyra was already the home of many people and her future was bidding fair. Situated on the peak of the hills that overlooked the lands of the Mississippi River, Palmyra longed to have connections with the water front. Right on the banks of the mighty stream was Marion City, with a great future looming before her to become the metropolis and gateway of the West. It was the minds of Palmyrians, the proper point for railway connections with the water front.

However bad the people wanted the railroad, they realized it was a gigantic undertaking. but nevertheless there was in less agitation for the project in the spring of 1847. During of the same year the sentiment for the building of the road reached its peak. It had been talked of a great deal, had been given much publicity in the newspapers, and a meeting was held on the 23rd of April to discuss it, but little was accomplished and the session was finally adjourned until May 7. By the time this date rolled round there was renewed enthusiasm and on that evening negotiations were again opened in a public meeting. This session started the ball rolling and a committee of three men was appointed to raise the necessary funds with which to do the surveying for the project and choose the most practical route and make such other investigations as might be necessary in the preliminaries. The meeting was presided over by Thomas Millian and the committee appointed was as follows: Wm. H. Walker, J. G. Easton and James F. Mahan. This committee set to work without delay to accomplish the duties which had been assigned it, made a report at a meeting held the 15th of May, 1847. The report was favorable and nothing seemed to stand in the way of building the road. The organization of the company was there perfected and for the next move went into an election of a board of trustees. Stanton Buckner was elected president of the company, with James E. Mahan as treasurer and James G. Easton,secretary.

During the latter days of May the surveying for the right of way was commenced, a portion of the stock subscribed was called an estimate of the cost of building was made. The contract for the grading of the roadbed was finally let to J. W. Shepherd, work to be completed by November 1, 1847. Actual work on the construction of the road was started without delay and by the middle of October there was a large force of men at work on the project. Interest in the railroad, however, did not continue long, save with a few, and, on account of failure to collect some of the subscriptions, work slackened during October, and by the next spring operations were practically at a standstill. On account of certain property owners refusing to give possession to the right-of-way, work was suspended altogether in April, 1848.

This move seemed to revive interest, and the railway project was soon again the chief topic of discussion. This led to a mass meeting which was held on the evening of April 15th, at which a great deal was accomplished toward continuing work on the road. Various committees were again set to work and, as a result of the meeting, the people resolved to go on with the construction of the railway–at least until all funds were completely exhausted. The first part of May brought about a vigorous campaign for additional funds and announcement was made that all obstacles concerning lit-of-way had been removed. The company now had possession along the entire route, and work was resumed.

Interest in the railway continued until the Hannibal & St. Joseph came to the front. When it was announced that the Hannibal & St. Joseph railroad would come through Palmyra the Marion City road was abandoned. All Palmyra wanted was railway connection with the water front and the outside World, but the attempt to build the little railroad will always retain historical interest of the utmost degree, for, back in that early day, the undertaking was a big one, engineered by men who would not be satisfied to stay as they were, but who employed the word “Progressiveness” as their daily motto.

Although Marion City has long since been destroyed, its site now being a part of the Mississippi River bed, traces of the Marion city are still to be seen.