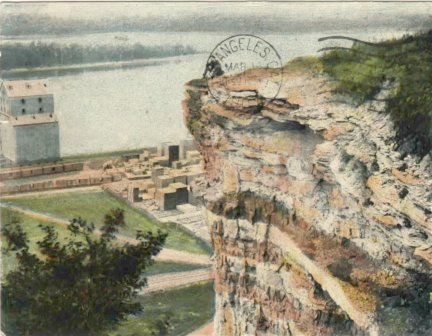 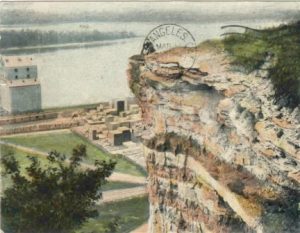 “Lover’s Leap,” overlooking the Mississippi river at Hannibal, Mo., immortalized by Mark Twain as Cardiff hill in his book “Tom Sawyer,” was recently sold at sheriff’s sale for $7. Robert L. Marks of Hannibal was the purchaser.

This plot of ground, which comprises the very peak of the gigantic bluff and includes the historic leap, is a part of the old Settles-Trice estate and consists of a little more than a half acre. The property was sold for back taxes against it amounting to $70 and the sale was conducted by Sheriff Clarence L. Bender of Palmyra, county seat of Marion county.

The bidding was not spirited—in fact, there were only three persons in attendance aside from the auctioneer-sheriff. They were Ben Ely Jr., prosecuting attorney of Marion county; Robert L. Marks, deputy sheriff, and a local newspaper man. Mr. Ely and Mr. Marks were the only bidders, the former offering $5 and the latter $7.

Many years ago, the legend tells us, a beautiful Indian maiden, spurned by her lover, leaped from the summit of this hill, which is a natural platform of stone, into the waters of the Mississippi river 200 feet below. Hence, it’s name. The story of her tragic passing has been handed down from generation to generation since the time white man first inhabited northeast Missouri.

The legend of the Indian maid, however, is not the only historical memory connected with “Lover’s Leap”. In the spring of 1850 Tom Sawyer stood on this famous hill and watched a line of white topped wagons creep slowly across the lowlands of Illinois. One by one he saw them go aboard rudely constructed ferries, then drive off again, many for the first time upon Missouri soil, where they resumed their journey to join the great caravans headed for the new El Dorado. Gold had been discovered in California, the year before and the rush was on.

Tom Sawyer, we are told, decided to join the throngs that were pressing on toward the land of the setting sun. Learning of a large cave that lay in the shadows of “Lover’s Leap,” he gave up the long trip across the plains to California and instead of leading Huck Finn, Joe Harper, and the rest of his band to pluck nuggets of gold out of the pits of Death valley, he decided to lead them in the exploration of this mighty cavern, whose mouth seemed to invite adventurous youths. This cave is now famous the world over as Mark Twain cave, and is visited annually by thousands of people, many of them from foreign lands.

Away from the spot where “Lover’s Leap” keeps vigil over the peaceful waters of the Mississippi, is the island where we are told Tom Sawyer and his band played pirate. “Lover’s Leap” is truly one of the most traditional spots in Missouri and the inhabitants of Mark Twain land look forward to the time when it will be made into a beautiful park, one which Missouri will be proud to have the world visit.