All of the stone quarried in the vicinity of Hannibal is limestone of Burlington age. The texture and color of the rock and the thickness of the beds vary locally in the different quarries, but, on the whole, there is a very close resemblance between the stone from all the quarries. The most important quarries operated are the following: The Hannibal Lime Company, the Star Lime Company, the Empire Lime Company and the Waller Lime Company. About three miles south of the city the Atlas Cement Company have erected a factory for the manufacture of Portland cement, in the production of which the limestone and shale of the adjacent bluffs are used. 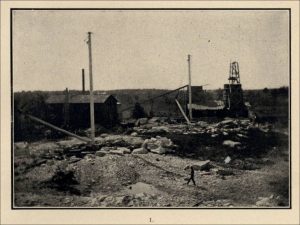 These quarries, which were until recently owned and operated by Munger Brothers, are now in the possession of a stock company of which Mr. John E. Jones, Jr., is manager. This company owns and operates two quarries, the most important of which is located at Bear Creek, about five miles west of Hannibal. The other is near the southern limits of the city.

The Bear Creek quarry has been operated very extensively, both for the manufacture of quicklime and for the production of building stone. The quarry has a south face extending east and west about 500 yards. The following is a description of the beds from the top to the bottom:

The major joints strike north and south. Three minor sets strike N. 40 deg. E., N. 15 deg. W. and N. 55 deg. E. These joints are from ten to fifteen feet apart, permitting the quarrying of large sized mill blocks. The layer of buff colored stone described in the section has only recently been met with in one part of the quarry. Prior to this the company had a working face of twenty-two feet. 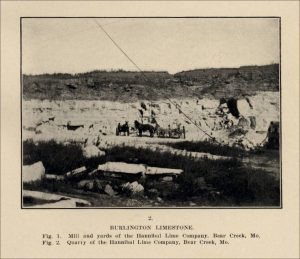 Iron sulphide was not observed in the stone. The different beds have a very uniform color and texture. They are not easily capped, as the stylolitic bedding planes or suture joints are usually tight. A very good grade of white building stone is obtained at this quarry. The stone is also used for sills, caps, steps and curbing. It has been used in the construction of the court house and public library, in Hannibal, as well as in numerous dwellings. A very good grade of white lime, known as the Bear Creek lime, is manufactured.

Steam drills and a channeler are used in quarrying the stone. Two gang-saws are used to cut it into blocks. The lime is burned in con-tinuous kilns. At the time this quarry was inspected, the company had 80,000 cubic yards of limestone stripped ready for quarrying, which placed them in a position where they could furnish without delay almost any quantity of stone desired.

The stone from the small quarry, which the company operates just south of Hannibal, is not as good for building purposes as that at the Bear Creek quarry. It is used almost exclusively for the manufacture of lime.

None of the iron stained limestone is used in the manufacture of quicklime. The colored stone is crushed for macadam and broken for rip rap.

This quarry is equipped with steam drills, a Gates crusher and continuous lime-kilns. All sizes of crushed stone are manufactured. The company owns and operates a cooper shop in connection with the limekiln. The output is shipped mainly to Iowa, Nebraska, Kansas, Oklahoma and Indian Territory.